3 Big Reasons Why Oil Stocks Are No Longer a Buy

Oil stocks have been one of the few bright spots in the S&P 500 (SPY), during the doom and gloom of the 2022 bear market. But that party could be ending soon. Below, I will explain 3 reasons why oil stocks should not be bought and how you can still make money from oil stocks as they fall from their highs. Continue reading for more

Oil stocks were the only place to see some real upside in the past year. After a wild rally at current levels, even energy names look tired and sluggish.

For our discussion, we are going to be using XLE, the Energy Select SPDR ETF, as the proxy for oil stocks. The two largest holdings in XLE are ExxonMobil and Chevron (CVX), which are both major oil companies. Together these two comprise over 42% of the weighting for the ETF. 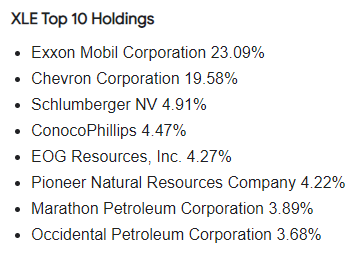 Oil Stocks Got Overbought But Are Weakening

The one-year price chart below shows the price action for the XLE. As you can see, XLE reached overbought levels Wednesday before falling sharply. 9-day RSI hit 80 then pivoted. MACD was close to an extreme before it began to soften. Bollinger Percent B approached 100 then fell.

Shares were trading at a big premium to the 20-day moving average. These indicators have been aligned in similar fashion in the past, indicating significant intermediate term tops for oil stocks.

I also highlighted the magnitude and length of the prior two rallies (purple lines). These lines are almost identical to the current price action for XLE.

The yearly chart below of oil stocks (XLE) versus the S&P 500 (SPY) shows just how great the outperformance of XLE has gotten to stocks overall. The XLE shows a robust gain of just over 60% in the past 12 months compared to a nearly 17.5% loss for the SPY. Remember that major oil stocks like ExxonMobil, Chevron and others are also in the SPY. This makes the SPY’s comparative performance even more impressive once the oil names have been removed. 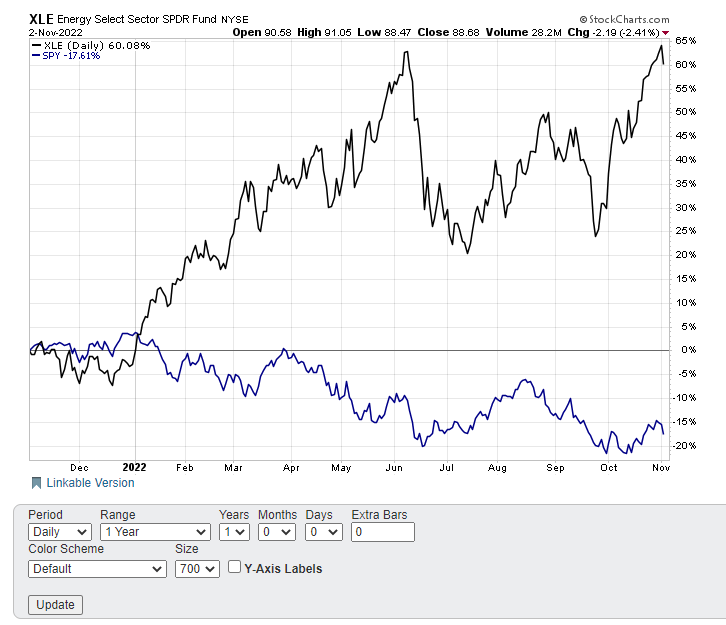 Interesting to note that the last time oil stocks hit such heights back in early June led to a significant drop, or mean reversion, in XLE. Look for a similar scenario to unfold with XLE being a relative underperformer to SPY over the coming months.

Oil Stocks Getting Way Ahead of Oil Itself

Oil and oil stocks tend to be well-correlated. This makes sense intuitively. Oil stocks should rise if crude oil prices climb, and vice versa. This was certainly the case in the first half of this year, as shown in the chart below. Both oil and oil stocks made highs in early June as West Texas Intermediate Crude prices ($WTIC) traded well over $120 barrel. 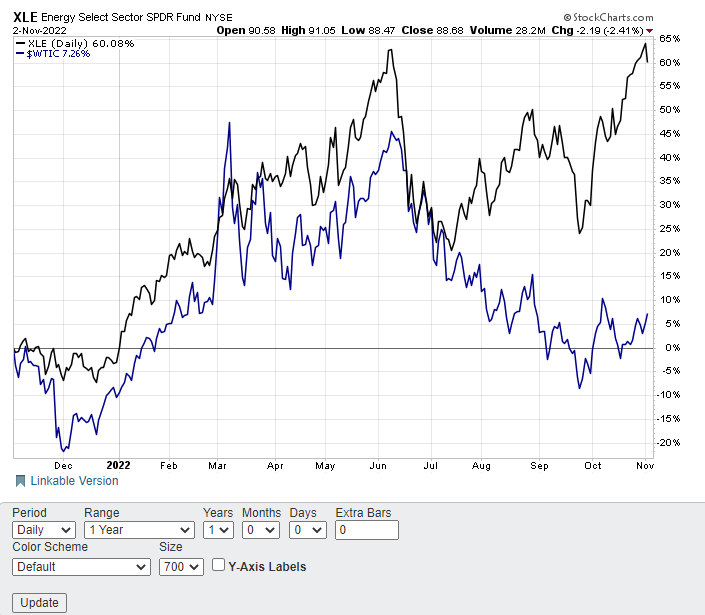 Since then, however, we have seen $WTIC retreat sharply back under $90 barrel while XLE made a fresh new high. This divergence has reached an extreme. XLE is now out-performing $WTIC by over 50% in the past 12 months.

I expect oil stocks will begin to fall in response to lower oil prices through the year-end. Investors and traders looking to make a profit from the expected convergence in XLE at lower levels can either buy puts and spreads on oil stocks, or sell out-of–the-money bear call spreads. Recently, we did just that with a put diagonal for ExxonMobil.

While the concepts behind options trading are simpler than most people realize, applying those concepts at the right time to consistently make winning trades is no easy task.

The solution is to let me do the hard work for you…by starting a no-obligation 30 day trial to my POWR Options newsletter. Using the quantitative strength of the POWR Ratings, I have discovered some of the most profitable options trades in the toughest markets this year. This is because I use both call and put options trades in order to make big gains in all market conditions.

In fact, since launching the service in November 2021 I have delivered a market beating 65. 44% return for my subscribers.

The good news is that you can become a subscriber today for just $1. You can get a $1 trial to access the current portfolio, my weekly market insight and every trade alert via text and email.

Plus: I will be adding the next two exciting options trades (1 call, 1 put) to the market when it opens Monday morning. So start your trial today!

About the Author: Tim Biggam

Tim spent 13 years as Chief Options Strategist at Man Securities in Chicago, 4 years as Lead Options Strategist at ThinkorSwim and 3 years as a Market Maker for First Options in Chicago. He is a regular contributor to the TD Ameritrade Network’s “Morning Trade Live” and makes frequent appearances on Bloomberg TV. His passion is to make the complex world easier to understand and more useful for everyday traders.

Tim is the editor of the POWR Options newsletter. Learn more about Tim’s background, along with links to his most recent articles.

The post 3 Big Reasons Why Oil Stocks Are No Longer a Buy appeared first on StockNews.com