A prototype of Tesla’s humanoid robot named “Optimus” took the stage tonight for the first time as part of Tesla’s 2022 AI Day presentation.

With techno music blaring and disco lights flashing, Optimus strolled, albeit carefully, towards the audience and lifted its arms in what appeared to be a “raise the roof” gesture. 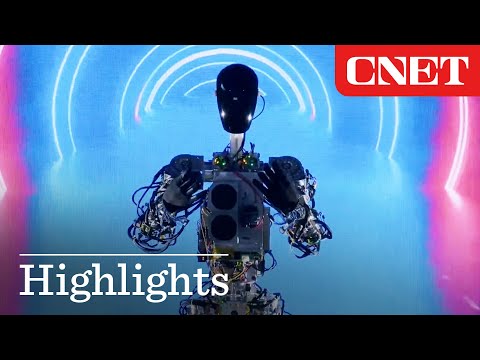 Dressed in a futuristic black leather jacket and black pants, Tesla’s CEO Elon Musk revealed that “this is literally the first time the robot has operated without a tether.”

Musk then explained that the robot could do much more than walk around the stage and wave.

“We just didn’t want it to fall on its face,” he joked.

Musk then introduced another version of Optimus, which is further along in the development stage and closer to the model that will go to market. Although this bot wasn’t ready to walk yet, it has actuators, a battery pack, and a control system taken from Tesla’s cars.

Musk said this robot will be able to move all its fingers independently and have opposable thumbs, allowing it to hold and operate tools.

“Our goal is to make a useful humanoid robot as quickly as possible,” Musk said.

Like the Tesla cars, he hopes to make them at high volume and low cost. Musk said this is what will ultimately differentiate his humanoid robots from competitors.

“It’ll be a fundamental transformation for civilization as we know it,” Musk said.

Related: Elon Musk Might Not Respond to Your Texts, Even When Offering Him Billions — And Other Fascinating Moments from the Twitter Court Case Text Dump

How to Stack the Odds in Your Favor…

Saving seals may come at the cost of fragile flora

Plastic microfibers in the Mediterranean Sea are keeping bacteria afloat

Get free shipping on this sleek corner lamp for the holidays