Investor Alert: We Have NOT Hit Bottom!

Bears are in charge for two months and will likely take a break for a while. Even though we have seen some impressive bounces this week…and could continue to see more in the coming days…don’t be fooled. We still have a lot of work to do before we reach the bottom. Why is this the case? How much lower will the S&P 500 (SPY) go? How can you profit in the coming weeks? For the answers, continue reading below.

This was a very interesting week for stocks. Several times the premarket activity pointed one way…and then the script got flipped.

Let’s look back at the week and see what the future holds for investors. This is in conjunction with the latest updates to our trading plan that will help us stay on the right side.

Stocks tested the lows again on Tuesday. Bulls were eager to take advantage of a healthy premarket bounce on Wednesday, as it seemed like a good opportunity to buy.

Next comes the Producer Price Index (PPI) report showing inflation way to hot. Investors were actually alarmed by the 2X month-over-month increase, which was well above expectations. This was the first monthly increase in 3 months.

The report revealed that inflation is all over the place. It’s not just about high energy prices. Inflation has become a sticky issue in almost every category.

Remember that PPI is the most widely followed indicator of the future CPI. Meaning that inflation is “not going quietly into that good night” any time soon. And why that healthy premarket bounce immediately evaporated with yet another test of the S&P 500 (SPY) lows in store Wednesday. A near-repeat of Wednesday’s action took place on Thursday. Stocks were expecting a big jump in the premarket, but another too hot inflation report (CPI), rained on everyone’s parade. This sparked another big sell off to new lows a tick under 3,500.

From there a big rally ensued to close the day at 3,669.91. It didn’t feel like it was built with sound logic or rationality. Everything about it felt like computers looking at 3,500 as a point of support and a place to have some fun for a few hours.

The most defensive groups were also the ones that outperformed. These are the ones you hold onto during a bear market, and then shed at the start of a bull market.

Not surprisingly investors were splashed with cold water on Friday when they tried to rally once again only to discover a very weak Retail Sales report. It increased…but it was less than inflation, which means that consumer spending is slowing.

Let’s remember that the average bear market sees a 34% decline. That would equate to 3,180 this time around. Let’s not forget that the market valuations prior to this bear market started were historic highs. Yes, the overall PE for the S&P 500 (SPY) was actually a notch higher at the start of 2022 then it was at the peak of the 1999 tech bubble. 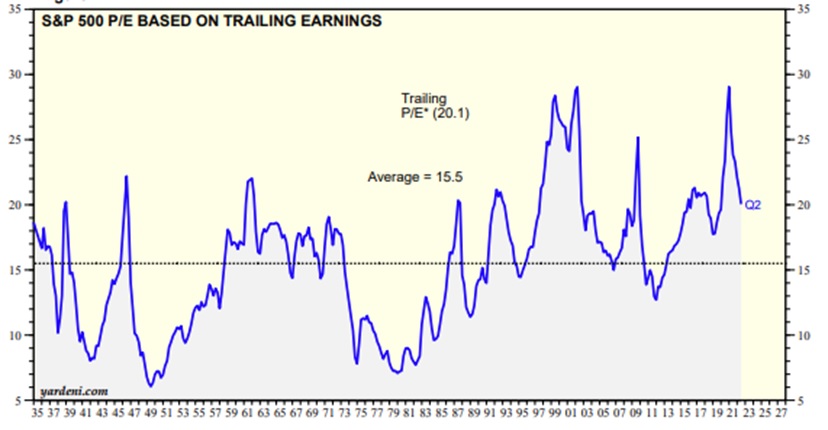 Now let’s remember that one of the things to help find bottom is an accommodative Fed that is aggressively LOWERING rates to help restart the economy and restart investment. The Fed is currently pursuing an aggressive rate hike program to reduce inflation. (Read more about that in my recent article: Hidden Reason for Bloodier Bear Market).

The truth is that NOTHING about Thursday’s bounce indicates the true and lasting bottom. There have been some wild rallies in bear markets along the way.

Some short…some long…but all NOT built to last.

When investors can finally appreciate the true virulence of the coming recession and approximate the full damage to the earnings outlook, then and only then can we start talking about a bottom forming.

At this stage, we are still waiting and watching to see what the outcome of high inflation Hawkish Fed will be. That likely happens in the first half of 2023 because so far their rate hikes have not tamed inflation one damn bit. They must keep pushing for higher rates to finally bring down inflation. The outlook for the next 3 to 6 months is still very bearish. However, in the short run it would not be surprising that 3,500 proves to be a point of support leading to a healthy bear market rally to unfold.

No…not the same kind of 18% “crazy train” rally we saw from mid June to mid August.

Perhaps more of a typical 5-10% rally could be in the offing as bears are getting a bit too comfortable having the upper hand for so long. To reaffirm your bearish strategies, you should consider any of these ill-fated rallies.

Kind of like during a bull market we chant “buy the dip“. Well during a bear market it’s the opposite where we chant “fade the rally“.

That will prove to be valuable advice as this bear market likely bottoms somewhere between 2,800 and 3,200. Trade accordingly.

Discover my special portfolio with 9 simple trades to help you generate gains as the market descends further into bear market territory. This plan has worked wonders since it was implemented in August, generating a 5. 69% gain as the S&P 500 (SPY) tanked -16.62%.

If you have been successfully navigating the investment waters in 2022, then please feel free to ignore.

However, if the bearish argument shared above does make you curious as to what happens next…then do consider getting my updated “Bear Market Game Plan” that includes specifics on the 9 unique positions in my timely and profitable portfolio.

Wishing you a world of investment success!

About the Author: Steve Reitmeister

Steve is better known to the StockNews audience as “Reity”. Not only is he the CEO of the firm, but he also shares his 40 years of investment experience in the Reitmeister Total Return portfolio. Learn more about Reity’s background, along with links to his most recent articles and stock picks.

The post Investor Alert: We Have NOT Hit Bottom! appeared first on StockNews.com

US stocks stumble after hotter than expected services data

Your Values Can Be Compromised When You’re Under Stress. Here’s How to Get Them Aligned Again.