John Cena spent time on a recent European trip with a fan who fled Ukraine to be with his mom.

According to a video posted to the WWE’s YouTube channel, the star got word that Misha Rohozhyn, a non-verbal 19-year-old with Down syndrome, escaped the war-embattled nation with his mother, Liana Rohozhyn, after their home in Mariupol was destroyed, and that Liana encouraged Misha throughout the journey by telling him they were on their way to see his hero, Cena. Cena made Liana’s dream a reality by taking Misha to an Amsterdam residence where the refugees were staying on June 5.

” When I read Misha’s story, it reached me. Not just Misha’s story but also Misha’s mom’s,” Cena explained in this video. “Having taken three days off work at the same time as I read this story, and being an hour away from home by air, it quickly turned into, ‘We are going. ‘”

He said, “And that means spending an evening building blocks and eating cake.” It’s a special time when it comes to the new friends .” 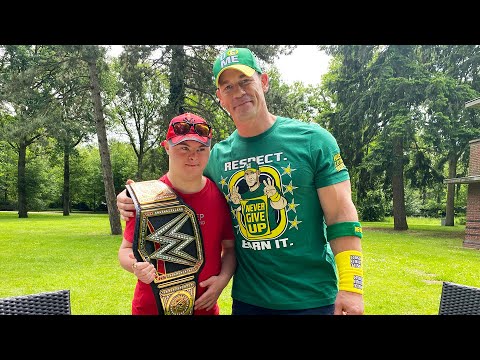 The footage shows Cena greeting Misha and giving her a hug before telling the teenager, “I’ve come quite a distance to see you.” I’ve heard many stories .”

Cena arrived in a branded shirt and hat with his catchphrase “Never Give up” and presented the items to Misha. He also gave Misha the WWE Championship belt.

Liana, clearly touched, said to Cena through a translator: “John, thank-you.” You have a big heart .”

After the trip, the star tweeted, “What a wonderful way to spend a Saturday. Misha and his mother, Liana, define #NeverGiveUp.”

Prior to the visit, the Wall Street Journal reported in May that Misha had been crying earlier that month in his room in Amsterdam because Cena had yet to arrive. Liana said to the publication that she told Misha, “We’re still on our journey, but we need stop here and save a little money for a ticket to America to find him there. ‘”